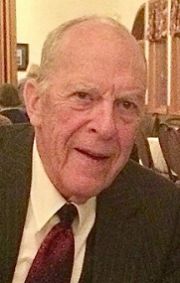 Bill was born on July 31,1939 in McKeesport, Pa. The oldest of six siblings, Bill graduated from Haverling High School in Bath in 1957 and went on to become a NYS Trooper for 23 years. He held several odd jobs after retiring and also worked in the lab at Phillips Lighting, where he developed several patents. He was the co-owner of Narby Computers and Town of Urbana Justice for 15 years. He officiated hundreds of marriages, his favorite part of being a Justice.

Bill married Terri Petrisek from Bentleyville, Pa. on Sept. 11, 1965. They celebrated 55 years of marriage this past September.

There will be no services or calling hours. A celebration of life will be held at a later date at the convenience of the family. Donations in Bill’s name can be made to Cure PSP at PSP.org.

The LaMarche Funeral Home, 35 Main St., Hammondsport is honored to assist Bill’s family with the arrangements.