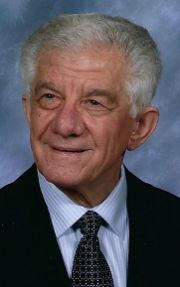 Born in Hornell on Aug. 5, 1929 he was a son of the late Anthony and Rose Sirianni. Besides his parents, he was also predeceased by a sister and brother-in-law, Cleora (Robert) Carroll; two brothers and a sister-in-law, Frank (Marian) Sirianni and Raymond Sirianni; a sister-in-law, Thelma Sirianni ; a niece, Gloria Koskie and many dear friends.

A lifelong resident of Hornell, Bill was a graduate of St. Ann’s School and Hornell High School. He proudly served his country with the United States Army during the Korean Conflict from 1951 until his honorable discharge in 1953.

Bill was an elementary school teacher for 20 years for the Hornell City School District before he retired.

A devout member of Our Lady of the Valley Parish, he was a daily communicant of St. Ann’s Church in Hornell and weekly attended the Perpetual Adoration Chapel; he also volunteered with the church’s “cleaning crew” and was a faithful member for 10 years at St. Ann’s Bingo. Bill was a Third Degree member of the Hornell Council No. 243, Knights of Columbus, a member of the Catholics United for Faith Organization, the Hornell Elks Lodge No. 364 and St. Ann’s School and Hornell High School Alumni Associations. He was also a former member of the Maple City Lions Club in Hornell for 13 years and volunteered for Meals On Wheels.

Calling hours are 1-3 p.m. Sunday (Nov. 29, 2020) at the Bishop & Johnson Funeral Home, Inc., 285 Main St., Hornell. Friends are invited to join his family at St. Ann’s Church, 31 Erie Ave., Hornell where a Mass of Christian Burial will be celebrated at 10 a.m. Monday (Nov. 30, 2020). Committal prayers and interment will follow at St. Mary’s Cemetery, Town of Fremont. THOSE ATTENDING THE CALLING HOURS OR FUNERAL MASS WILL BE REQUIRED TO WEAR A FACIAL MASK AND PRACTICE SOCIAL DISTANCING.

The United States flag and the Army flag will proudly fly at the Bishop & Johnson Funeral Home, Inc. in recognition of Bill’s military service.

In lieu of flowers, those wishing may contribute in his memory to St. Ann’s Church, 27 Erie Ave., Hornell, N.Y. 14843. Envelopes for memorial contributions will be available at the funeral home.

The Bishop & Johnson Funeral Home, Inc. is honored to assist Bill’s family with the arrangements,