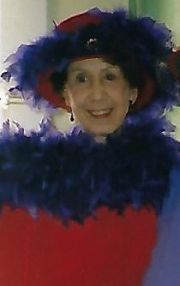 HORNELL-Theresa M. Kimmel, 92, of Maple Court Homes, entered into rest, with her daughter by her side, on Friday morning (Jan. 8, 2021) at Steuben Center in Bath.

Born in North Versailles Township, Pa. on May 30, 1928, she was a daughter of the late Michael and Eva (Shendrovich) Mazalovich. Besides her parents, she was also predeceased by her first husband, Stephen Damolaris; her second husband, Samuel Kimmel; one granddaughter, Tahnee Sue Eldridge; and three sisters, Mary Mazalovich, Cathy Stepanovich and Ronnie Nerone.

She remained in Tulsa where she actively volunteered at the Philbrook Museum, the Thornton YMCA and nursing homes. She also served as a “one on one” mentor to teach children social skills. She especially loved being an “Elder Cat” in her Red Hat Society chapter. Theresa was an avid traveler. She traveled extensively throughout the United States and Europe, and visited Israel twice.

She moved to Hornell 12 years ago at the age of 80 to be closer to her family.

Her daughter is deeply grateful to Hornell Office of the Aging and Faith In Action for their support and help to her mother through the past few years. Theresa called them her “angels”,

There will be no public calling hours or funeral service. The family will celebrate her life privately.

In lieu of flowers, those wishing may contribute in her memory to a charity of their choice.

Online condolences or remembrances of Theresa are welcomed on the Facebook page of Bishop & Johnson Funeral Home, Inc.