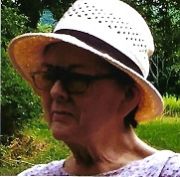 She graduated from Avoca Central School in 1968 and graduated from Elmira Business Institute in 1969, followed by a number of courses at Corning Community College related to her work.

After school Roseanna lived in Painted Post, NY and worked at Southern Tier Library System in the Library Services and Resources division until her retirement. She served in various capacities over the years, including Print Shop Supervisor and Adult Services/Library Assistant in the Extension Department. She also worked from home typing for individuals, including a cookbook for publication, a draft for a local author, genealogies and academic papers.

Roseanna was a member of Howard Union Church in Howard, NY where she served as Church Clerk for several years.

She loved reading, cooking, sewing, knitting, crocheting and needlework and watching movies, new and old. One year she volunteered to teach a cooking class for a 4H Club.

After her mother’s death, she moved back on the farm to live with her father and care for him in his later years. After her father’s death she chose to stay on the farm in Howard, where she enjoyed gardening and caring for a growing number of cats who showed up looking for shelter and food. There were 10 cats who called the farm their home at the time of her death. They are now being cared for by her brother and his wife.

Roseanna was preceded in death by her mother Helen (Putnam) Harris and father Thomas Lavern Harris, her half-brother Raymond Albee and wife Teddy, her half-sister Marylynn Albee, and her niece Rosemary Albee.

Roseanna’s wishes were for her ashes to be scattered on the family farm in Howard. A memorial service will be held in mid-summer for family and friends.

Online condolences or remembrances of Roseanna are welcomed on the Facebook page of Bishop & Johnson Funeral Home, Inc.