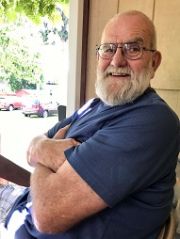 HORNELL – Everyone who knew Bob Dickey knows that he had a great beard. Underneath that beard was a contagious smile and gentle eyes. He was kind, generous and his family and friends never questioned his love for them.

After a sudden and brief illness, Bob went to his heavenly home at the age of 75 on September 11, 2021. In his last hours his wife Carol and daughters Karen and Heather were by his bedside singing him into heaven. In the same way he lived his life, Bob went peacefully to his new home. Like everything else that he did in life, his faith in God was persistent and strong. He had a lifetime faith and publicly demonstrated his love for Christ by being baptized at the age of 68 by Pastor Cedric Cooper at Hornell First Baptist Church.

Not only was Bob dedicated to his family, he also had a heart for volunteering. He dedicated his time to Faith in Action of Steuben County, Habitat for Humanity RV Caravaners, Meals on Wheels, maintaining the Finger Lakes Trail, and several volunteer activities at First Baptist Church of Hornell.

He is survived by his wife of 54 years, Carol and daughters Karen (Chris) Lyons, and Heather (Eric) Bischof and grandchildren Josh (Paige) Lyons, Alexis Lyons, and Trae Bischof and great grandchildren Lincoln and Eli Lyons. Bob was also a loving father figure to nieces Kathie (Dickie) Stephens, Cheri (Geoff) Odell, Janice (Kelley) Louthan green, and nephews Chris (Michelle) Green and Jeff (Ann) Green. He had a great impact on a large extended family of nieces, nephews, and cousins and friends.

You would often hear from Bob and Carol of how blessed they were. After his retirement from Hornell City School District, they spent many years traveling to see their kids and grandkids, visiting them in Italy, Alaska, California, Michigan, Maine, Tennessee and Virginia. They took their “summer friends” (the grandkids) Josh, Lexi, and Trae on many adventures as they were growing up. They swam in lakes and oceans, tubed down rivers, hiked through the woods, and even rode a horse-drawn wagon train for a week through the North Dakota Prairie. Bob was also an avid Bills fan – in fact Carol and Chris often said “he thinks he’s on the team”. Bob now has the best seat in the house.

He was proceeded in death by his parents Roy and Jeanette Helmer Dickey, sister Patricia Dickey Green, and brother Ronald Dickey.

Services for Robert Royce Dickey will be held at Hornell First Baptist Church on Saturday, September 18, 2021. Calling hours from 1pm – 3pm and the funeral service will begin at 3pm. Face masks will be provided for those who would like to wear them. In lieu of flowers, the family requests donations to The Mission Fund at First Baptist Church of Hornell 28 Church Street, Hornell NY 14843.