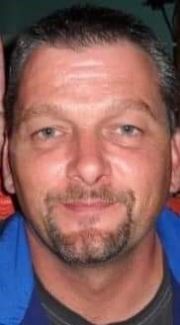 PERRY/HORNELL-Robert M. Guthrie, Jr. 51, of Perry, NY, formerly of Hornell, passed away late Friday evening (Aug. 20, 2021) at the Wyoming County Community Hospital in Warsaw, NY to be with his Dad. He was surrounded by his loving family. Sadly, alcoholism took over his happiness, his body, and eventually his life.

Born in Watertown, NY on Feb. 20, 1970 he was a son of Robert M. Guthrie, who predeceased him and Jennie (Bulkley) Guthrie who survives.

A resident of Hornell for most of his life, Bob has resided in Perry, NY since 2015. He was a graduate of Hornell High School, class of 1989 and proudly served his country with the U.S. Army from 1990 to his honorable discharge in 1991 as a Private First Class.

Bob mastered his enviable skills as a carpenter throughout the years of his life. Oddly enough though, his first job was with the Italian Villa as a dishwasher, short order cook and eventually front of the house manager; where he developed a lifelong friendship with Dicky Argentieri. He was the manager of the yard at North Main Lumber for many years, and worked with Mike Bossie Construction as his right hand man, before beginning his employment at the Pro Desk at Lowes. He was the person you always looked for when going into Lowes because he was knowledgeable and could locate whatever you needed. He was the go-to source for all the local contractors. He enjoyed helping people with a variety of home improvements which spurred him to start his own business known as Truman’s Tops.

Bob loved music and was an avid Elvis fan. He was a master at music trivia. “Who sings this?” was his favorite test for everyone. He was the first one to jump onto the dance floor and last one to leave. He enjoyed spending time with family playing cornhole, laughing and drinking PBR.

The United States flag and the Army flag will proudly fly at the Bishop & Johnson Funeral Home, Inc. in recognition of Bob’s military service.

In lieu of flowers, those wishing may contribute in his memory to the Wounded Warrior Project 4899 Belfort Road, Suite 300, Jacksonville, FL 32256 (www.woundedwarriorproject.org).

The Bishop & Johnson Funeral Home, Inc., in Hornell is honored to assist Bob’s family with the arrangements.