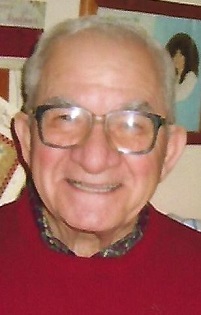 Born in Hornell on Feb. 26, 1926 he was a son of the late Anthony and Rose Sirianni. On Oct. 22, 1949 he was married at St. Joseph’s Church in Wayland to Thelma R. Wolfanger, who predeceased him on March 22, 2017 after 67 years of marriage. Besides his parents and wife, he was also predeceased by one daughter, Gloria Koskie; one sister, Cleora Carroll; three brothers, Frank, Raymond and William Sirianni; and a former son-in-law, Chuck McCollumn.

A lifelong resident of Hornell, Dick was a graduate of St. Ann’s School and Hornell High School. He proudly served his country for two years with the U.S. Army during World War II with the 8th Infantry Division. He served in France as an Infantryman and later as a clerk at Fort Sam Houston, Texas. He was honorably discharged in 1946 and was awarded the Combat Infantry Badge, the American Theater Campaign Ribbon, the WW II Victory Medal, the European-Africa-Middle East Campaign Medal and the Good Conduct Medal.

For 22 years he was employed by the former Durkee Bread Company in Hornell and retired as a crew chief from the Hornell DPW after 20 years of employment.

An avid bowler, he loved spending several weeks in the summer at Keuka Lake, going on drives for ice cream cones, eating out with his wife, Thelma and visiting with friends. Dick especially enjoyed attending his grandchildren’s sporting events and loved visits with his great-grandchildren. Dick was very devoted to his family and was a wonderful husband, father, grandfather, brother and friend.

He is lovingly survived by three daughters, Carol Sirianni, Rosemarie McCollumn (Tim LaChiusa) and Mary Ann (John) VanScoter all of Hornell; three sons, Rick Sirianni and James (Samantha) Sirianni all of Hornell and Don Sirianni of Belfast, N.Y.; a son-in-law, William Koskie of Hornell; 16 grandchildren and several great-grandchildren; as well as several nieces, nephews and cousins.

The family would like to express their sincere appreciation to the staff of the Vincent House in Wayland for the wonderful care they gave to Dick.

Calling hours are 4-7 p.m. Monday (Oct. 17, 2022) at the Bishop-Johnson & DeSanto Funeral Home, 285 Main St., Hornell where the United Sates flag and the Army flag will proudly fly in recognition of Dick’s military service. Relatives and friends are invited to join the family at St. Ann’s Church, 31 Erie Ave., Hornell where a Mass of Christian Burial will be celebrated at 10 a.m. Tuesday (Oct. 18, 2022). Committal prayers and interment, with military honors, will follow at St. Mary’s Cemetery, Town of Fremont.

In lieu of flowers, those wishing may contribute in his memory to the Vincent House, 310 Second Ave., Wayland, NY 14572 (envelopes will be available at the funeral) or to a charity of the donor’s choice.

The Bishop-Johnson & DeSanto Funeral Home is honored to assist Dick’s family with the arrangements.

Online condolences or remembrances of Dick are welcome in the comment section below or on the Facebook page of Bishop-Johnson & DeSanto Funeral Home.com.