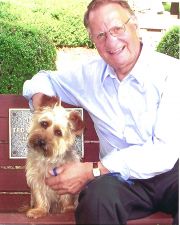 Melvin, the only son of the late Russell Marvin Kendrick and the late Rose Marie Kouba Kendrick, was a native of Baltimore, Maryland, and later a resident of Hornell, New York. He went to meet the Lord on Wednesday, January 12, 2022. Melvin was born on November 14, 1932 at Johns Hopkins Hospital in Baltimore, Maryland, attended the Baltimore public school systems. He also became a member of the Boy Scouts of America, Troop 96. He served as a Den Chief for a group of Cub Scouts. He achieved the rank of LIFE Scout with the earning of nineteen (19) merit badges before leaving for college in North Carolina. He had received his higher education from the Baltimore Polytechnic Institute, Wake Forest University, with specialized courses at North Carolina State College, and the University of Baltimore. In addition, he was a diplomate of “Surveying and Mapping,” “Civil Engineering,” “Sanitary Engineering,” and I.C.S. Scranton, PA.

He volunteered for the submarine service (U.S.N.R.), which evoked a lifetime of study and interest in naval history. He visited submarine memorials in Pearl Harbor HI, Cleveland, OH, Hackensack, NJ, San Diego, CA, and other sites. In his later years he collected many submarine histories and pictures as a member of the U.S. Naval Institute.

He received a “Presidential Appointment” and served in the position of local draft board member, Maryland Local Board No. 35, and fulfilled his duty as prescribed by the President of the United States ending on July 29, 1991. Mr. Kendrick also received a Certificate of Appreciation for recognition of five years of loyal and faithful service rendered in the administration of the Selective Service System, dated the 23rd day of September 1990.

In addition to his civil engineering work, he owned and managed many rental properties in Maryland and New York. He also was a member of the Steuben County Landlords Association, Bath, NY. Mr. Kendrick worked full-time in later years on maintaining his properties, improving his properties, and helping deserving tenants acquire their own homes. He mentored several employees in learning construction and administrative skills.

Mr. Kendrick and his late wife, Millie, and son David owned a horse training and farm facility and bred horses both in Maryland and in upstate New York for many years.

In later years Melvin met his later life’s companion, Diana Hovorka, also widowed, and together they travelled the world extensively and cruised on many bodies of water. A highlight during his travels was visiting his family ancestral home in Baltimore, County Cork, Ireland.

Memorial services for Mr. Kendrick are to be conducted in Reisterstown, MD at the convenience of his family, with later interment in the KENDRICK family burial grounds in Druid Ridge Cemetery, Pikesville, MD.

Thank you and may you all seek God and that He will be with all of you always. I look forward to being with you and Millie in heaven.