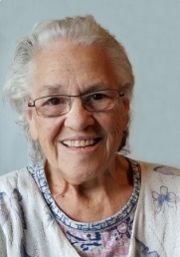 AVOCA – Lenora was born at the family home on Jacob’s Ladder Road, Avoca, NY on March 30, 1933 as the 3rd of 6 children to Arthur & Maude Frederick. Her mother couldn’t decide on a middle name of Anne or Anna, so didn’t give her either one.

The family cattle farm was lost due to typhoid fever. At the age of four, her family relocated just a few miles away in the valley and began a chicken farm that also included an artesian spring. Growing up, Lenora worked on the family farm tending to the chickens when she could, but mostly she helped her mother inside the home with meals, washing clothes, housekeeping, and as a seamstress while her siblings helped their dad. In her young teens, a local dairy farmer just a couple miles up the road began taking the Frederick kids to Sunday School and Church. That farmer’s son, Donald Cedric Clymo, and Lenora Frederick were married at the Wallace Wesleyan Church in Wallace, NY on July 28, 1951. She was 18 and he was 17.

In 1959, Don and Lenora, and their 5 children moved to Transfer, PA where they both enrolled in Bible College Institute. After graduating in 1963, the family, which now included 6 children, moved back to Steuben County, New York, into a house on a family parcel of land located on Clymo Hill Road in Avoca. They later moved to Corning, NY where they built their own home. After the “Agnes” flood of 1972, in search for drier climate, the family moved west with time spent living in New Mexico and Texas. In 1974, their 7th child arrived, through adoption. In 1983, while living in New Mexico, they lost their home and all earthly possessions including their pets in a fire that started due to a huge storm. Don and Lenora were married just shy of 34 years at the time of Don’s death in 1985. Lenora longed to be ‘home’, and eventually moved back to Avoca, NY in 1989.

In high school Lenora played the French horn and was part of the orchestra, in the drama club, and on the student council. She graduated from Avoca Central School in 1951. Lenora had a life-long love for the Lord, and easily invited others to church and to church functions. It remained important to her that her family was always in church any time the doors were open. Lenora was a Sunday School teacher, a Payroll clerk for the Corning, NY school district, a Bookkeeper at several insurance companies, and retired as a Bookkeeper in 2004 from Kinship Family and Youth Services of Hornell, NY. She was the author of several unpublished books of poetry and a book of her life’s story. She was an avid prayer warrior, loved singing and butterflies, enjoyed reading, and working in her flower gardens.

Lenora passed from this life into Heaven on April 16, 2020 after a short illness (unrelated to the Coronavirus), at the age of 87. She was predeceased by her parents, Arthur & Maude Frederick, her siblings Don, Betty, Ron, and Doris, her husband Don, daughter Elly, son Bob, and 2 grandchildren Millie and William.

Due to the present Coronavirus pandemic, there will not be a funeral service. A Celebration of Life service will be scheduled for later this year. Condolences can be mailed to the family at c/o 60425 State Route 415, Avoca, NY 14809, or shared online on the Facebook page of Bishop & Johnson Funeral Home, Inc. or at www.bishopandjohnsonfuneralhome.com.

From the family: Dad was mom’s life-long love, and she never remarried. Dad has been up in Heaven waiting for her arrival for 35 years. We miss them both very much. We can only imagine the special reunion that is taking place!