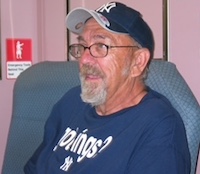 HAMMONDSPORT – Mr. LaVerne Frederick Erway of Hammondsport, New York passed away this past Sunday, November 6, 2022 at the age of 85. Mr. Erway, a lifelong resident of Hammondsport, was born to James Erway and Lillian (Russell) Erway on April 14, 1937, and was the sixth of eight children. In 1961 he married his wife Elizabeth Bondelyn Vandelinder (Bonnie) with whom he built a home and family over the course of their 61 years of marriage. In 1963 he began working at the Great Western & Taylor Wines where he worked faithfully for 34 years.

LaVerne was an incredibly proud American and a true lover of his home in the Finger Lakes, often sharing history, local stories, and tales of his family with his children and grandchildren.  A man who took joy in simple things, LaVerne was born with, and maintained until his last days, a natural curiosity and enthusiasm, a youthful spirit, and a seemingly endless craving for ice cream. He was also a life-long fan of the NY Giants and Yankees. He took the most joy, however, in his family, especially his children and grandchildren, and was proud of the lives they built. LaVerne served as a quiet, but steady force that anchored a family spread across the state and country. The Erway family will not be quite the same without him, but his legacy of sacrifice, hard work, and quiet love will be held dear by those he left behind.

LaVerne is preceded in death by his siblings: Evelyn Perry, Eldora Messick, DeVillo Erway, Phyllis Howard, Elwood Erway, Ronald Erway, Lyman Erway and two of his six children, Brian Erway and Bruce Erway. He is survived by his wife Bonnie and four of his children and their spouses: Thomas & Mandy Erway of Madison, Alabama, Diane & Kieth Morlan of Hammondsport, New York, Terry & Renee Erway of Bath, New York, and Michael Erway of Hammondsport, New York. He is also survived by his eight grandchildren and fourteen great-grandchildren.

A grave-side service will be held on Saturday, November 12th for immediate family followed by a celebration of life at the American Legion, 8425 NY-54, Hammondsport, from 2:30-4:30 p.m. for family and friends.

Online remembrances or condolence of LaVerne are welcome in the comment section below or on the Facebook page of Bishop-Johnson & DeSanto Funeral Home.