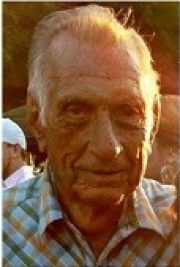 Born in Alfred Station on May 19, 1925, he was a son of the late Floyd and Hattie (Blowers) Norton. Besides his parents, he was also predeceased by his wives, Rose “Fritz” Cappell Silsby and Shirley D. Katrensky.

A former resident of Alfred Station, Vern was a graduate of Alfred-Almond Central School, class of 1943. He proudly served his country during World War II with the U.S. Army from 1943 to his honorable discharge in 1946 an was awarded the EAME Service Medal, the Good Conduct Medal and the World War II Victory Medal.

Before moving to California in 1962, he was employed with the former Erie Railroad and also served with the Auxiliary Police in Hornell. While residing in California he was employed as a laborer for several different construction companies. He returned to Hornell in January of 2015 and resided with his daughter and son-in-law, Patricia and George Porter.

Vern was a member of the Hornell Moose Lodge No. 210 and will be remembered for the outstanding care he gave to his vehicles, washing and waxing them at least once a week.

Besides his daughter and son-in-law, Patricia and George Porter of Hornell; his family also includes his two grandchildren, Jill (Jim) Risley of Cameron Mills and Kenneth Porter of Lockhavem, Pa.; his four great-grandchildren, Peyton and Keegan Risley and Ellison and Lane Porter; his brother, Eugene Norton of Hornell; his sister, Geraldine Lorow of Hornell; as well as his nieces and nephews.

There will be no calling hours. A committal service, with military honors, followed by interment, will be held at 10 a.m. Tuesday (July 21, 2020) at the Bath National Cemetery, with Deacon Robert McCormick officiating.

In lieu of flowers, those wishing may contribute in his memory to the Maryville Home for Adults, 7678 County Route 70, Avoca, N.Y. 14809.

Online condolences or remembrances of Vern are welcomed on the Facebook page of Bishop & Johnson Funeral Home, Inc.