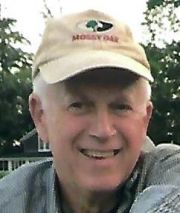 ALMOND – Kenneth L. Kernan, 74, of Twin Valley Terrace went to be with the Lord on Monday (Dec. 1, 2020) after a long and courageous fight with Parkinson’s disease and ALS (Lou Gehrig’s disease).

A lifelong resident of Almond, Ken graduated from Alfred-Almond Central School, Class of 1964; he was the first recipient of the Alumni Scholarship. He graduated from Alfred State College in 1966 with a degree in graphic design. Following his graduation, he served two years in the United States Army, earning the rank of Specialist 5th Class while serving in the Headquarters Division G3 for a 15-month tour in Korea. He received the Army Commendation Medal for Meritorious Service.

On Oct. 19, 1968 he was married to Elizabeth Northup of Hornell. They made their home in Almond.

Before joining the United States Postal Service in 1973, Ken was employed as a product designer at SKF Industries in Hornell and Air Preheater Corporation of Wellsville. During his postal career he worked as a clerk at Scio, Alfred, and Alfred Station Post Offices, as well as Almond. As Postmaster in Almond, from October of 1980 until his retirement in 2006, Ken was dedicated to looking out for his customers, and especially appreciated their treats and the drawings he received from children expressing their gratitude.

Ken was a lifetime member of the NRA, a member of the Almond Rod & Gun Club, Arkport Legion, and former member of the Alfred Almond Bible Church where he served as a deacon. Most recently he attended the First Presbyterian Church of Arkport.

Ken enjoyed hunting and fishing, but what he loved most of all was being with his family, especially his nine grandchildren. Attending their performances and sporting events and spending time together at Loon Lake brought him great joy.

Ken will be remembered for his generous sharing of talent and skills. He was known for fixing whatever needed repair, building sheds, decks, fencing, laying and replacing flooring, and refinishing furniture. He was an avid collector of antiques of many kinds; his appreciation for detail and beauty was truly unique. His dry sense of humor and carefully planned jokes were a gift that will be missed as much as his gentleness and quiet ways.

He shared 52 years together with Liz raising their family. They enjoyed summers at the lake and winter trips to Florida, as well as trips to Alaska, California, the Grand Canyon, Yellowstone National Park, and the Southwestern United States. The Buffalo Bill Center of the West in Wyoming was a favorite.

In addition to his parents he was predeceased by his niece, Nicole Marie Osborne and cousin, Chuck Flinn.

Calling hours are 11 a.m.-1 p.m. Saturday (Dec. 5, 2020) at the Bishop & Johnson Funeral Home, Inc., 285 Main St., Hornell. THOSE ATTENDING WILL BE REQUIRED TO WEAR A FACE MASK, PRACTICE SOCIAL DISTANCING AND USE HAND SANITIZER AFTER ENTERING THE FUNERAL HOME. A private funeral service will be held at the Bishop & Johnson Funeral Home, Inc. at the convenience of the family, with the Rev. Bruce Incze officiating, followed by committal services and interment, with military honors, at Woodlawn Cemetery, Almond.

The funeral service will be live streamed and may be seen either on the homepage of www.bishopandjohnsonfuneralhome.com (please see link for live stream) or on the Facebook page of Bishop & Johnson Funeral Home, Inc. for 30 days beginning at 1:30 p.m. Saturday (Dec. 5, 2020).

The United States flag and the Army flag will proudly fly at the Bishop & Johnson Funeral Home, Inc. in recognition of Ken’s military service

Those wishing may contribute in his memory to Christian Camping Services; Bryan Schoeffler, 5723 Nipher Road, Bath N.Y. 14810. Envelopes for memorial contributions will be available at the funeral home.

Online condolences or remembrances of Ken are welcomed on the Facebook page of Bishop & Johnson Funeral Home, Inc.

The Bishop & Johnson Funeral Home, Inc. is honored to assist Ken’s family with the arrangements.