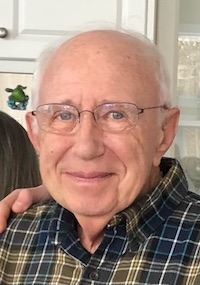 HAMMONDSPORT – John Richards Lonergan, 86 of Hammondsport, NY and Tampa, FL passed away peacefully on September 8, 2022 at the VA Medical Center in Bath, NY after a long battle with Parkinson’s Disease. He was born on December 26, 1935 in Madison, WI to John L. & Erma I. (Richards) Lonergan. A graduate of the University of Wisconsin, he married the love of his life, the former Diane Jorgensen in September 1961. They were married for almost 61 years.

John was a graduate of the Wisconsin Military Academy as a 2nd Lieutenant. As a member of the Army National Guard, he was called to active duty for one year during the Berlin Crisis.  Together, John & Diane went to Fort Lewis, WA in October 1961. After returning from active duty John was hired by Corning Glass Works, July 1963. He served in many capacities during his employment, ending as Director of Product Litigation. He retired from Corning after 32 years in 1995.

John had a passion for old and unusual things. He collected antique cars, built his own working lighthouse and traveled the world with Diane. But most of all he loved spending time with his children and grandchildren at their Keuka Lake home enjoying boat rides, campfires and fireworks every 4th of July.John is survived by his beloved wife, Diane and 3 daughters – Kelly (John) Aebli of Endwell,NY, Shari (Michael) Gustin of Rochester,NY, and Canden Simmons & partner Martin Janda of Rochester, NY and his 5 grandchildren – Kevin (Carly) Aebli, Kimberly (David) Ermacor, Zachary Aebli, Ryan Gustin and Elijah Simmons.

The family wishes to express their thanks and gratitude to the 3B floor care team at the VA hospital for their care & kindness to John & his family during his final days. At John’s request, services will be private and at the convenience of the family.

Online condolences or remembrances of John are welcome in the comment section below or on the Facebook page of Bishop-Johnson & DeSanto Funeral Home.