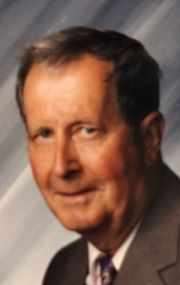 HORNELL – John P. Wulforst, 91, departed this life Monday (May 24, 2021). He passed peacefully & surrounded by family at his home in Hornell.

John was born in Hicksville, NY (Long Island) on October 9, 1929 to John F. and Magdalena (Hoeffner) Wulforst. The family moved to Wayland, NY in 1942 where he graduated from Wayland Central School. John attended Lemoyne College before transferring to Cornell University. Prior to receiving his B.S. from Cornell in 1958, John served three years in the U.S. Army during the Korean War.

John joined the USDA as a Soil Scientist where he worked until 1987. He then joined the staff of the Allegany County Soil Water District as an environmental specialist until 1999. John was recognized by the USDA for surveying more than 1 million acres during his career. He was one of two men in NYS to map over one million acres (1.029M) & one of 10 nationally. John worked in over half of the counties in NYS which included a special facilities project at Lake Placid in preparation for the 1980 Winter Olympics. As a soil scientist John surveyed & mapped acreage in NY, TX, NC, AL, VT PA, TN, DE, MD, and MS. In his own words, “This was my life and I couldn’t have picked a better job.”

John touched many lives, and those fortunate to know him will remember those moments. Whether you saw him in church, the grocery store, the backyard, a ballpark, or a random field in the “boonies” you walked away feeling better for the experience.

He will be remembered as a husband, dad, brother, uncle and friend who always looked after and took care of others. John always made time for a quick game of ball with his children regardless of sport or season; he always answered the call. The best part of his stories or jokes was the sound of his voice and uproarious laughter you knew would follow. Quiet, unassuming, intelligent, empathetic and strong were just a few of his many great qualities. Even though he is gone, he’ll always be here as we think of great memories and shed a few tears. Thanks Dad!

The family will greet relatives and friends beginning at 9:30 a.m. Tuesday (June 1, 2021) at St. Ann’s Church, 31 Erie Ave., Hornell where a Mass of Christian Burial will be celebrated in his memory at 10 a.m. Tuesday.

In lieu of flowers, those wishing may contribute in his memory to either the Hornell Area Humane Society, 7649 Industrial Park Road, Hornell or to St. Ann’s Academy, P.O. Box 446, Hornell, NY 14843. Envelopes for memorial contributions will be available at the church.