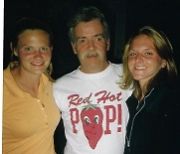 HORNELL-Jan N. Cleveland, 68, entered into rest peacefully Thursday morning (May 14, 2020) at his home on Grand Street, after a brief non Coronavirus illness.

Born in Hornell on Dec. 25, 1951 he was a son of the late Hillard and Elaine (Kelly) Cleveland. Besides his parents, he was also predeceased by his nephew, J. J. Cleveland.

A lifelong resident of Hornell, Jan was a graduate of Hornell High School, class of 1971 and proudly served his country with the U.S. Army in Vietnam from 1972 to his honorable discharge in 1975 and was awarded a National Defense Service Medal. After his military service he received an associate’s degree from Alfred State Vocational School.

He was employed by Conrail before he began his career with Philips Lighting in Bath, retiring in 2013.

Throughout the years Jan enjoyed rock climbing, photography, fishing and hockey. He will be remembered as a “hard core” Buffalo Sabers fan. Most of all he loved to spend time with his two granddaughters, Adalyn and Whitney, who he called his “baby dolls.” He especially enjoyed taking them for rides so he could buy them French fries.

The Bishop & Johnson Funeral Home, Inc. in Hornell is honored to serve the family of Jan N. Cleveland.

A private viewing and funeral service will be held at the convenience of the family at the Bishop & Johnson Funeral Home, Inc., 285 Main St., Hornell. Interment will be in Bath National Cemetery.

The United States flag and the Army flag will proudly fly at the Bishop & Johnson Funeral Home, Inc. in recognition of Jan’s military service.

In lieu of flowers, those wishing may contribute in his memory to their favorite charity.

Online condolences or remembrances of Jan are welcomed on the Facebook page of Bishop & Johnson Funeral Home, Inc.