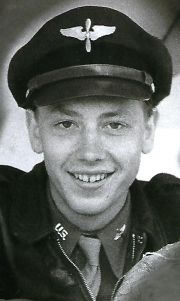 A graduate of Hornell High School, class of 1944, Skip proudly served his country during World War II with the U.S. Army Air Corps from 1944 to his honorable discharge in 1945.

For more than 50 years he was a member of the Aircraft Owners and Pilot Association and was also a member of the Hornell High School Alumni Association. His former memberships include the Hornell Moose Lodge No. 210, the Arthur H. Cunningham American Legion Post No. 440 in Hornell, the Warplane Museum, the National World War II Museum and a flying member for 10 years of the Confederate Air Force (currently the Commemorative Air Force).

Skip was a Red Cross blood donor having donated the maximum for 11 years. When he was no longer able to donate he recruited for the Hornell Blood Banks for five years exceeding the quotas by 43 per cent when preceding quotas were seldom achieved.

He and Cleora traveled extensively until the onset of her illness in 1995. So that he might care for her, he sold his airplane and stopped flying after 54 years in which he logged approximately 4600 hours.

On May 30, 2015 he was presented with the prestigious Wright Brothers Master Pilot Award for flying 50 consecutive years or more without an accident or being convicted of violating a Federal Aviation Regulation.

There will be a hour of calling from noon- 1 p.m. Tuesday (Aug. 3, 2021) at the Bishop & Johnson Funeral Home, Inc., 285 Main St., Hornell, where a funeral and committal service, with military honors, will be held at 1 p.m. Tuesday with Deacon Robert McCormick officiating. Interment will be in Hope Cemetery, Hornell.

The United States flag and the Army flag will proudly fly at the Bishop & Johnson Funeral Home, Inc. in recognition of Skip’s military service during World War II.

In lieu of flowers, those wishing may contribute in his memory to the American Red Cross, 50 Prince St., Rochester, NY 14607. Envelopes for memorial contributions will be available at the funeral home.

The Bishop & Johnson Funeral Home, Inc. in Hornell is honored to assist Skip’s family with the arrangements.