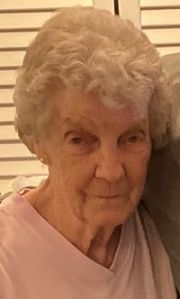 ARKPORT-Helen P. Crosson, 88, passed away early Tuesday afternoon (April 26, 2022) in the presence of her loving family, at her home on Holly Court, after a brief illness.

Born in Hornell on Sept. 26, 1933 she was a daughter of the late Olmstead and Adell (Colley) VanScoter. On June 20, 1952 she was married in Hornell to Gerald A. “Jerry” Crosson, who predeceased her on Feb. 6, 2008 after nearly 56 years of marriage. Besides her parents and husband, she was also predeceased by her daughter, Jeri Lou Geer in 2017, one brother, John VanScoter in 1991 and two sisters, Luella VanScoter in 2014 and Mildred Griffin in 2018.

A lifelong resident of the Hornell-Arkport area, Helen graduated from Hornell High School, class of 1951.

She was employed for 10 years by the former Big N Department Store in Hornell as a salesclerk and later as an office manager. She was also employed at the former Marion Rohr Co. in Hornell and the former Bethesda Community Hospital in North Hornell.

Helen and Jerry sold their home in Hornell and moved to central Florida for a few years to be near her brother, John. They made many friends there and she worked at a local hospital in the pharmacy department. After John’s untimely death they returned to Hornell.

She was an avid bowler and participated in several state tournaments. Helen also enjoyed playing golf and knitting. She will be remembered most of all for her devotion to caring for her children, grandchildren, siblings and her nieces and nephews.

Her loving surviving family includes one son, Joseph Crosson (Shirley Anderson) of Canisteo, NY; five grandchildren and three great-grandchildren; one sister, Fay Parada of Arkport, with whom she resided; one brother, Ronald (Mary Ann) VanScoter of Arkport; as well as her nieces, nephews and cousins.

Calling hours are 5-7 p.m. Monday (May 2, 2022) at the Bishop-Johnson & DeSanto Funeral Home, 285 Main St., Hornell. Relatives and friends are invited to join her family at St. Ann’s Church, 31 Erie Ave., Hornell where a Mass of Christian Burial will be celebrated in memory of her and her husband, Jerry at 10 a.m. Tuesday (May 3, 2022). Masks are suggested, but not required, at both the funeral home and church. Interment will be in St. Mary’s Cemetery, Town of Fremont.

In lieu of flowers, those wishing may contribute in her memory to either CareFirst (Hospice) 3805 Meads Creek Road, Painted Post, NY 14870 or to the Hornell High School Alumni Assoc., P.O. Box 135, Hornell, NY 14843. Envelopes for memorial contributions will be available at the funeral home.

The Bishop-Johnson & DeSanto Funeral Home is honored to assist Helen’s family with the arrangements.