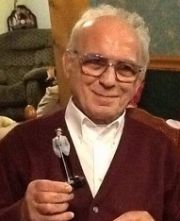 Sonny attended Hornell High School and he proudly served his country with the United States Army from 1955 to his honorable discharge in 1957. He was employed at the former Men Shop in Hornell before he became the owner and operator; after retiring he drove limousine. For several years he also served as an alderman for the City of Hornell.

He loved coaching and throughout the years he coached Midget football and Babe Ruth baseball. A fan of the Buffalo Bills and the NY Yankees, Sonny was also an avid Frank Sinatra fan. Most of all he especially enjoyed spending time with his grandchildren.

A member of Our Lady of the Valley Parish, he was a communicant of St. Ann’s Church in Hornell and was also a member of the Hornell Council No. 243 Knights of Columbus and the Arthur H. Cunningham American Legion Post No. 440.

His surviving family includes his wife of 62 years, Ellen (Read) DeSanto, who he married in Hornell on Aug. 9, 1959; three children, David (Lisa) DeSanto of Texas, Lynn (John) Di Martino of Rochester and Mary Ellen (Pat) Smith of Hornell; five grandchildren, Amber, Elyssa and Haydn Smith, Natalie, and Alex DiFiore; one brother, Richard (Josephine) DeSanto of Rochester; one sister-in-law, Donna DeSanto of Hornell; one brother-in-law, Joe Pardi of California; as well as many nieces, nephews, and cousins.

Calling hours are 2-4 p.m. Sunday (Dec. 19, 2021) at the Bishop & Johnson Funeral Home, Inc., 285 Main St., Hornell. Friends are invited to join his family at St. Ann’s Church, 31 Erie Ave., Hornell where a Mass of Christian Burial will be celebrated at 10 a.m. Monday (Dec. 20, 2021). Facemasks will be required at the funeral home and church. Committal prayers and interment, with military honors, will follow at St. Ann’s Cemetery, Hornell.

The United States flag and the Army flag will proudly fly at the Bishop & Johnson Funeral Home, Inc. in recognition of Sonny’s military service.

In lieu of flowers those wishing may contribute in his memory to the Wounded Warrior Project, 4899 Belforst Road, Suite 300, Jacksonville, FL 32256 (woundedwarriorproject.org/donate.) Envelopes for memorial contributions will be available at the funeral home.

The Bishop & Johnson Funeral Home, Inc is honored to assist Sonny’s family with the arrangements.