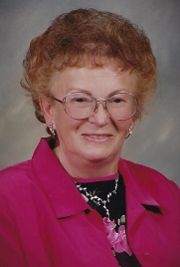 HORNELL-Fernand J. “Fern” Estey, 87, of The Woodlands Community, formerly of Arkport, went to be with the Lord Saturday morning (Feb. 1, 2020) at Elderwood at Hornell.

Born in New Brunswick, Canada on Oct. 15, 1932, she was a daughter of the late Gildas and Aurelie (Duval) Boucher. In 1950 she was married in Centerville, New Brunswick, Canada to Earl O. “Bud” Estey, who predeceased her on June 23, 2016, after 66 years of marriage. Besides her parents and husband, she was also predeceased by three sisters, Florence, Lydia and Diane; also two brothers, Andrew and John.

A resident of Arkport for 61 years, Fern has resided at The Woodlands Community in Hornell for about six and a half years.

Fern loved her family and she especially enjoyed nature, flowers and birds. For many years she was a member of the Bishopville United Methodist Church.

Her family would like to express their sincere appreciation to the staff of Elderwood at Hornell for the wonderful care she received while she resided there.

A funeral service will be held in her memory at the convenience of the family. Interment was in Heritage Hill Cemetery, Arkport.

In lieu of flowers, those wishing may contribute in her memory to the Bishopville United Methodist Church, 8528 Bishopville Road, Arkport, N.Y. 14807.

Online condolences or remembrances of Fern are welcomed on the Facebook page of Bishop & Johnson Funeral Home, Inc.