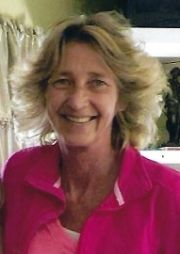 Born in North Hornell on July 4, 1959 she was a daughter of the late Donald and Jane (Eason) Hall. Besides her parents, she was also predeceased by one sister, Susan Hall.

A lifelong resident of Hornell, Donna was a graduate of Hornell High School, class of 1977. She was employed as the front office manager at the former Loohn’s Cleaners in Hornell before they closed.

She was a former member of the Hornell Association and the Hornell Elks Lodge No. 364 in Hornell.

Donna dearly loved her family, especially her four grandchildren and her dogs and cats. An avid Pittsburgh Steelers fan she also enjoyed NASCAR, and watching her favorite driver, Tony Stewart. Besides playing bingo, she loved weekly trips to the Casino with her Mom. Donna will be remembered most of all for always putting everyone else first before herself.

Her loving family includes her husband of 23 years, Herman “Russell” Brown, who she married on May 16, 1998 at the former Park United Methodist Church in Hornell; one daughter, Pamela (Jon) Miller of Avoca, NY and their three children, Maddie, Sophie and Willow; one son, Sean Dailey of Hornell and his son, Sylas; two sisters, Sandra Hall of Newburgh, NY and her daughter, Gabby Ramos; and Diane (Albert) Baker of Hornell and their daughter, Rebecca Baker; as well as several aunts, uncles and cousins.

In lieu of flowers, those wishing may contribute in her memory to the Hornell Area Humane Society, 7649 Industrial Park Road, Hornell, NY 14843 (envelopes will be available at the funeral home) or to a charity of the donor’s choice.

The Bishop & Johnson Funeral Home, Inc. in Hornell is honored to assist Donna’s family with the arrangements.