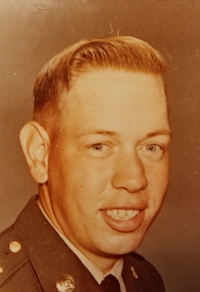 Besides his parents and his wife, Donald was predeceased by his son, James D. McAfee and sister, Joan Robinson.

Donald loved sitting on his front porch and greeting his neighbors as they went by.

The Bishop & DeSanto Funeral Home is honored to assist Donald’s family with the arrangements.

Online condolences or remembrances of Donald are welcome in the comment section below or on the Facebook page of Bishop-Johnson & DeSanto Funeral Home.