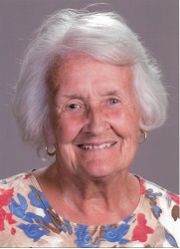 Born in 1938 in Rochester, N.Y. Betty was the oldest of five children of Seymour “Cy” and Helen (Noblett) Jones. In 1946 she moved to Mineola, N.Y. with her family and then to Arkport in 1952 where she graduated from Arkport Central School (Class of 1956.) She always considered Arkport her home.

After high school Betty attended and graduated from the former Genesee Hospital School of Nursing in 1958 and worked as an RN at several Rochester area hospitals as well as stints at St. James Mercy Hospital in Hornell. Returning to school she received her Bachelor’s Degree in Nursing from Roberts Wesleyan College in 1966 followed by her Master’s Degree in Health Education.

Most of her adult life she lived in Rochester, Farmington, Dansville, and ultimately settled in Bergen, N.Y. in 1980 until she retired from her career and moved back home to Arkport to take impeccable care of her mother. While living in Arkport, Betty also served as Director of the former Interfaith Volunteer Caregivers Program (Faith in Action) from 1999 until retiring in 2003.

Betty’s enjoyments included music. She was an accomplished piano and organ player, most often playing by ear without the aid of sheet music! Over the years she served as organist for various churches and played at many weddings. She also loved antiques, old furniture, buying clothes, and very rarely would she pass up the beckoning call of a good yard sale!

Betty’s deep Christian faith and love of God directed her life which led her to serve in different capacities in the churches she attended over the years especially in her home church, the Arkport Presbyterian Church, where she served as deacon. She looked forward to being a part of Bible studies, prayer groups, and was always ready to lend a hand and volunteer for anyone in need.

Dementia slowly began creeping into her life and her brother, Bob and his wife Dianne took loving care of her. In 2019 she moved to Arden Courts Memory Care Home in Largo, Fla. to be under the watchful eye of her loving sister, Beverly.

Betty is preceded in death by her parents, Cy in 1991 and Helen in 2011 as well as a brother, William in April of this year. She is survived by one sister, Beverly (John) Hubric of Largo, Fla.; two brothers, Bob (Dianne) Jones of Birdsboro, Pa., and Larry (Barb) Jones of Arkport; 11 nieces and nephews, and 24 great nieces and nephews.

Due to Covid restrictions there will be no calling hours. A private graveside service will be held at the convenience of the family at Heritage Hill Cemetery in Arkport and a memorial service will be scheduled later in 2021 when it is safe for all to gather.

Online condolences or remembrances of Betty are welcomed on the Facebook page of Bishop & Johnson Funeral Home, Inc.

The Bishop & Johnson Funeral Home, Inc., is honored to assist Betty’s family with the arrangements.