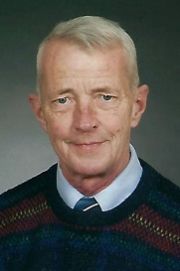 Andrew R. Allen
ALMOND â€“ Andrew R. Allen, 74, of Sunset Circle., passed away late Wednesday evening (March 11, 2020), surrounded by his loving family, at Highland Hospital in Rochester.
Born in Hornell on Oct. 29, 1945, he was the son of the late Roy and Jane (Farnum) Allen. Besides his parents, he was also predeceased by two sisters, Gail Allen and Audrey (Eugene) Pettibone.
A graduate of Hornell High School, class of 1963, Andy graduated from the Albany College of Pharmacy in 1968.
Throughout the years he was employed at various pharmacies in Andover and Hornell before he began his employment at the former Beaverâ€™s Pharmacy in Canisteo in 1976; he eventually purchased the pharmacy in 1997 and owned and operated it until he sold it in 2017.
Andy was a member of Christ Episcopal Church in Hornell.
His loving family includes his wife of 48 years, Alice (Sick) Allen, who he married at Christ Episcopal Church in Hornell on Nov. 20, 1971; one daughter, Danielle (Robert) Hyer of Bath; one granddaughter, Kathryn Hyer; two sisters, Carol Ciufo and Ardell Katz, both of Greenville, N.Y.; as well as several nieces, nephews and cousins.
The Bishop & Johnson Funeral Home, Inc., in Hornell is honored to serve the family of Andrew R. Allen.
DUE TO THE CORONA VIRUS PANDEMIC THE CALLING HOURS AND FUNERAL SERVICE HAVE BEEN POSTPONED AND WILL BE ANNOUNCED AT A LATER DATE.
In lieu of flowers, those wishing may contribute in his memory to Christ Episcopal Church, 6 Center, St., Hornell, N.Y. 14843 or to the Almond Volunteer Ambulance, 1 Marvin Lane, Almond, N.Y. 14804. Envelopes for memorial contributions will be available at the funeral home.
Online condolences or remembrances of Andy are welcomed on the Facebook page of Bishop & Johnson Funeral Home, Inc.