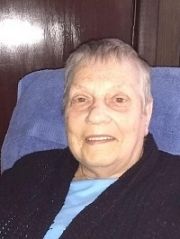 Born in New Milford, PA on March 16, 1931, she was the daughter of the late Karl and Emma (Clapper) Liebig. In 1949 she was married at St. John’s Church in Susquehanna, PA to Thomas J. Hayes, who predeceased her on Sept. 28, 1998, after 48 years of marriage. Besides her parents and husband, she was also predeceased by two sons, Martin Hayes and James Hayes; and her brother, Paul L. “Jack” Liebig.

A graduate of Susquehanna High School, Amelia has resided in Hornell since 1949. She was employed at the former Big N in Hornell and at the age of 50 she attended Alfred State College and received her RN. She was employed as a registered nurse at St. James Mercy Hospital in Hornell for about 10 years, retiring in 1991.

Calling hours are 4-7 p.m. Thursday (June 23, 2022) at the Bishop-Johnson & DeSanto Funeral Home, 285 Main St., Hornell. To honor her wishes there will be no funeral service. Interment will be in St. John’s Cemetery, Susquehanna, PA.

In lieu of flowers, those wishing may contribute in her memory to the Hornell Family YMCA, 18 Center St., Hornell, NY 14843. Envelopes for memorial contributions will be available at the funeral home.

The Bishop-Johnson & DeSanto Funeral Home is honored to assist Amelia’s family with the arrangements.