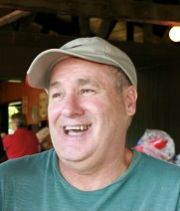 Al was born March 26, 1952, son of the late Robert and Marian (Barnhardt) Johnson. He grew up in Spencer, N.Y. and was one of Spencer VanEtten High School’s most accomplished athletes. He was a true four sport star, participating in football, track, baseball, and basketball (his favorite sport and one he excelled at, being one of that school’s most prolific scorers and leading the IAC in scoring during the 1969-1970 season averaging over 22 points a game including a 41 point game that still stands as one of the highest individual scores in that school’s history). He is a Spencer-VanEtten School Athletic Hall of Fame Member.

Al was employed by VanAtta Garage before joining the Army. After his Honorable discharge, he worked at Sounds Fine before settling in with his career with the City of Elmira, where he worked until his ALS forced an early retirement. Al truly remained happy and good-natured despite his progressing ALS. He loved being outdoors, animals, reading, being home, and especially spending time with family. Al was very grateful for the kindness and support given by the VA and, in his final few days – Hospice.

Al found special comfort, and wished us also to, in Craig Morgan’s song “The Father, My Son and The Holy Ghost”.

In lieu of flowers, per Al’s wishes, donations may be made to your local SPCA or the ALS Association.

Graveside Services will be held Saturday, January 16, 2021 at 11:00am at Pleasant Valley Cemetery in Hammondsport, N.Y.

The LaMarche Funeral Home, 35 Main St., Hammondsport is honored to assist Al’s family with the arrangements.

Online condolences or remembrances of Al are welcomed on the Facebook page of Bishop & Johnson Funeral Home, Inc.