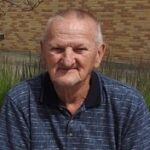 ARKPORT-Surrounded by loved ones, Ambrose James Zahradnick left this earth on Saturday (August 6, 2022) at St. James Hospital in Hornell, NY at the age of 87.

Ambrose was born on December 26, 1934 to Andrew and Bertha Zahradnick in Archbald, PA.  He was one of 10 children – being the youngest son.

Ambrose leaves behind his beloved wife of 66 years, Mary and three children, Bruce (Janiene), Mary Elaine (Gary), and James (Sharon).  He absolutely adored his grandchildren: James (Ann), Caileigh (Tim), Ashley, Michael (Laura), Jared, Kirstin and Kelsey.  He was the proud great-grandfather of Maggie Leigh, Sammy, Evie and Sydney.  He had a very special bond with his brother-in-law, Joseph and sister-in-law, Donna.  He is also survived by his sisters, Alice, Cheryl, and Emily and many nieces and nephews.  His family was absolutely everything to him.

He was pre-deceased by his parents and siblings: Andrew, Jerry, Robert, Paul, Ann, Patsy and his special hunting canine companion, Rowdy.

Ambrose was a hardworking, caring and generous man.  He demonstrated these traits early in life by picking cherries and green beans to provide school clothes for his siblings.  He instilled the value of hard work and commitment in all generations that followed, being quoted as saying, “You aren’t getting any better sitting on the couch.”

Ambrose met the love of his life at the age of 13 and they have been inseparable since marrying in Olyphant, PA on August 27, 1955.

Ambrose was an outstanding basketball player, earning a D1 scholarship at the University of Scranton.  During his second year of college, he enlisted in the U.S. Army where he was known as Alphabet, as his initials spanned from A-Z.  After two years in the service, he was employed by Neisner Brothers where he was a valued Store Manager. He was the ‘go to’ guy for the company and was often tasked with opening new stores and improving failing locations.

It was Neisner Brothers that led the family to Arkport, NY in July of 1967 – which became their forever home for over 50 years subsequent to moving 13 times.  Ambrose cherished Arkport and the life that he and Mary built there.  They spent their years listening to polkas, going to horse tracks, attending athletic events, losing at casinos, and watching three generations grow up.

There quite possibly is not a more loyal Mets fan than Ambrose, as he and Mary watched almost every game together.  He also enjoyed watching the Buffalo Bills.  He was an avid outdoorsman – hunting late into his life.  His fishing skills won many Finger Lakes tournaments with friends.

When looking for Ambrose, the first stop was always in his bountiful garden.  For years, he grew the most gorgeous flower and vegetable gardens.  He spent countless hours growing seedlings in the house until he was ready to plant the following spring.   He was so proud of his garden and in true Ambrose fashion, was generous in sharing his vegetables with family, friends, and neighbors.

While Ambrose will be missed, his legacy lives on.  He has instilled steadfast values and hard work ethic into all generations he leaves behind.  In his absence, we will carry on the many lessons he has taught us.  We will continue to laugh and remember the amazing times we had as a family and we will live the way he wanted us to – to the fullest.  His unique, comical, and misspelled answers during family game nights will remain unmatched.  We will remember him cheering in the stands and will never forget his excellent driving skills, as evidenced by the numerous dents and dings in his car. His love for Mary and their example of marriage will be carried on for generations to come.

It is believed that nicknames are a sign of affection.  If true, then Ambrose was showered with affection. Throughout the years he was referred to as: Bible, Barzak, Spike, Alphabet, Mr. Z, Chief, Slick, Pop Pop and Papa Z.

The family will greet relatives and friends from 9-10 a.m. Friday (August 12, 2022) at St. Ann’s Church, 31 Erie Ave., Hornell where a Mass of Christian Burial will be celebrated in his memory at 10 a.m. Friday. Private committal prayers and interment, with military honors, will follow at Heritage Hill Cemetery, Arkport.

In lieu of flowers, the family asks that you make donations in Ambrose’s honor to the Hornell Area Humane Society, at 7649 Industrial Park Road. Hornell NY 14843. Envelopes for memorial contributions will be available at the church.

Online condolences or remembrances of Ambrose are welcome below in the comment section or on the Facebook page of Bishop-Johnson & DeSanto Funeral Home.

I always looked forward to visits with Andy. He never opened his mouth without a grin on his lips and kind words on his tongue. The best tribute I can give is the wonderful descendants he left. They will carry his legacy forward for generations. Love you Andy.

I was so very fortunate to have Andy as my
Father -n -Law. We talked to him many times in a week and he always made me laugh , saying something funny before hanging up the phone. He was clever, comical, and just fun to be around.
He had a way of making you feel comfortable and always had many stories to tell.
Andy was also a great Grandpa. He has left an imprint on our children that will last a lifetime and I am very grateful. He was an avid Mets fan, and I always heard him and Bruce discussing the games with great gusto.
Spike, you will be missed more than words can be expressed. We love you.

All rights reserved. This obituary is also archived at bishopdesanto.com